It’s an unfortunate fact, but there are simply not enough homes for all the cats awaiting adoption. You can play an important role in controlling feline overpopulation by neutering your cat.

Not only that, but research shows that neutered cats live longer and have reduced risks of a variety of health problems, including certain types of cancer.

The advantages for female cats

Contrary to popular opinion, it is not kinder to allow female cats to have one litter before being neutered. Mammary tumours and womb infections are far more common in cats that have had kittens.

Female cats come into season once every three weeks, eight months of the year. They cry incessantly and will draw a crowd of noisy, smelly males to the door.

Keeping your cat indoors to prevent mating is traumatic for both of you, but if she escapes, she will produce an unplanned litter which may be difficult to home.

Neutering will help your female become more gentle and home-loving.

The advantages for male cats


Un-neutered Tomcats claim their territory by spraying, both indoors and out, with pungent urine that leaves a strong after-smell.

They will roam long distances looking for females in season, often getting lost, injured or killed by motorists.

And they also fight with other toms, leading to wounds, abscesses and infection with deadly feline diseases.

Neutering reduces the aggressive impulses of your cat and thus decreases the likelihood of injury due to fighting, as well as making your male cat more affectionate and contented.


Neutering does not directly cause cats to gain weight and will not normally affect their activity levels. 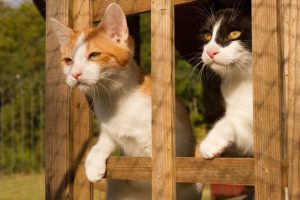 Surgical sterilisation, however, can lead to a weight gain because of slight changes in metabolism, and because activity levels normally decline with maturity.

If your cat does gain weight afterwards, simply reduce the amount of food you feed and increase activity levels, or consider switching to a manufactured ‘light’ diet.

Reduce the number of unwanted cats


Millions of unwanted kittens and cats are put to sleep each year. The kindest, most responsible action is to have your cat neutered.

An un-neutered female cat can have up to four litters each year, with up to six kittens in each litter. In five years she could have over 250,000 descendants!

Before and after the operation


After consulting with your vet, follow instructions regarding withholding food and water from your cat beforehand.

The operation involves removal of both testicles for males, and removal of the womb and ovaries for females. Ask your vet at what age the practice prefers to neuter cats. This can be as early as four months for both males and females.


After the operation, cats should be confined to the house for a few days, kept quiet and prevented from jumping, or biting at their stitches.

Your vet will discuss post-operative care of the incision, including whether the stitches will need to be removed, or will dissolve naturally.