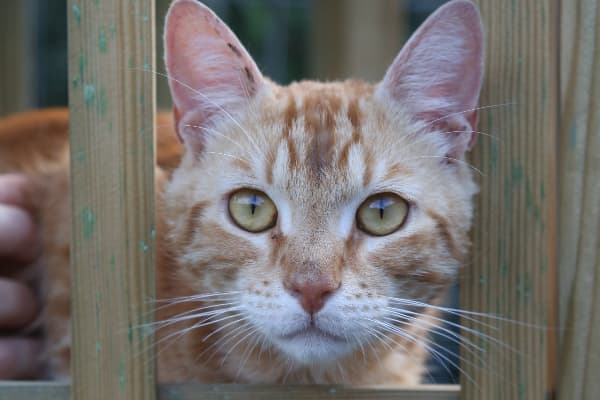 A parasitic infection in cats is a common problem that every cat owner has to face at some point in time.

From causing serious illnesses to being just a minor pest, parasites in cats may either affect externally, in the form of fleas and ticks, or may cause gastrointestinal parasitism.

In fact intestinal parasites affect a majority of kittens shortly after birth.

It is important to consult your vet for the most effective worm and flea treatments, as well as advice about vaccinations.

At what age do I worm my kitten?

What are the symptoms that my cat or kitten has worms?

What are the types of intestinal worms that cats become infected with?

There are a number of intestinal worms, the first we will look at are tapeworms in cats that are the result of them ingesting infected fleas while grooming themselves or eating an infected rodent.

They live in the small intestine of the cats and are usually observable in the stool of the animal. The common intestinal parasite symptoms in this case are a shaggy coat, irritability and diarrhoea in cats.

Tapeworms are small and white in colour, and are usually detected in the cat’s stool. They can also be seen under and around the tail of the pet.

Appearance of small rice like segments around the pet’s anus, abnormal weight loss, and extreme hunger are the common symptoms of cat worms.

Hookworms are very small worms that have hook-like mouth parts that burrow into your cat’s intestinal wall and suck blood.

They can cause anaemia, black or bloody diarrhoea and sometimes death in kittens.  These parasites are nasty blood suckers, which stay attached to the intestinal walls of the animal, and feed off the host’s blood.

One of the most common parasites which are known to affect felines, are roundworms.

Cats can become infected with roundworms by eating infected lizards, mice, birds and bugs. They can also become infected from ingesting soil contaminated by infected faeces. These are usually milky white in colour, having tapered ends.

Classic symptoms of these worms in cats, include round bellies, vomiting (sometimes, parts or whole of the worms), diarrhoea, dehydration, and appetite changes.

Other symptoms of roundworms in cats which may be seen are affected growth (in kittens), intestinal blockage and dull coat.

Other types of worms

As the name suggests, heartworms make their home in the pulmonary arteries, lungs & hearts of cats.

These are thin and white, and could be several inches long.

Characteristic symptoms which may indicate that your pet has been infected by heartworms include vomiting, coughing, weight loss and wheezing.

The affected animal may seem to be more lethargic than usual, this is one of the behaviour symptoms of cats with worms, and might also experience difficulty in breathing. Loss of appetite may also be a symptom of heartworm in cats.

Stomach worms, as the name suggests, inhabit the animal’s stomach. They are also known as ollanulus worms. Common signs to watch out for are vomiting, weight loss, and lethargic feeling most of the time.

And finally, ringworm, although it is actually not a worm but a fungus that affects the skin.

External parasites are usually found on the skin and fur of the cats and kittens. They derive their nourishment by drawing the blood and other fluids from the skin causing discomfort and irritation to the animal.

Ear mites are microscopic parasites that invade the ear canals and areas that surround the ears.

If your cat is constantly scratching the area around its ear or is shaking its head from time to time, it might signal an ear mite infection.

If left untreated the parasitic infection may result in bleeding of the ear canals or damage to it causing permanent or partial hearing loss in cats.

Fleas are the one of the most common feline parasites, identifiable by the black or dark drown specks on the cat’s belly or on its fur.

They cause excessive scratching in the cat which often lead to open sores and diseases.

And finally ticks that usually affect the soft areas of the cat’s skin like the area around the face and neck. The bites usually result in scratching; skin irritation and can also result in skin diseases.